Learn How to Play Guitar here at www.RiffRiff.com 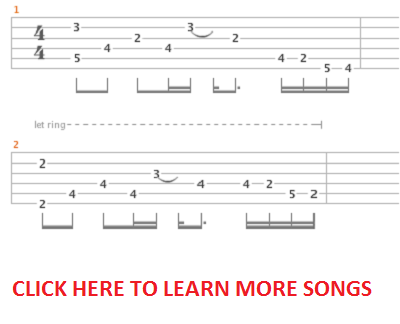 Inspired by the intense moments in his life caused by drugs, Anthony Kiedis wrote the song Under the Bridge and presented the lyrics to the rest of his band. The Red Hot Chili Peppers band wasn’t readily convinced by this personal song but they composed a new tune to match it.

The song was critically acclaimed and it was boosted by a video that was constantly aired on a music channel. The band found their initial break into mainstream composition with this song. The Under the Bridge guitar lessons will teach you how to play it in easy steps.

Blood Sugar Sex Magik is the album in which Under the Bridge is featured in. It is the fifth album  for the alternative rock band Red Hot Chili Peppers. It was produced by Rick Rubin and was originally debuted on 24th Sept, 1991. The album was at number #3 on Billboard 200 and includes  other popular songs Give it Away and Suck my kiss & breaking the girl.

How to play “Under the Bridge”

Guitar Chords Under the Bridge

The main chords used in the song begins with an A flat minor and continues with E major 7, E root 5, F sharp minor and G sharp minor root 6. The step by step methods will help you learn the right chords and play the song with relative ease.

Why Under the Bridge by Red Hot Chili Peppers is a Great Song?

The lyrics of the song are exceptionally poignant and striking.
It’s overall feel is enhanced with an epic outro featuring a choir singing.
The band made their first mark in the industry with this great song.

The song is one of the best and the first that brought the band Red Chili Peppers to limelight. It’s also the widely known number composed by the band. An intermediate guitarist will have the chance to try picked out chords, pull offs and hammer ons when practicing this song. The melodious memorable lyrics add up to its charm.

A Brief Intro For the Band Red Hot Chili Peppers

The band Red Hot Chili Peppers got their first break by playing in a band circuit when EMI approached them. The American alternative rock band couldn’t get the right kind of popularity with their first few albums. The band witnessed their first commercial success with their album Blood Sugar Sex Magik.

Throughout their journey, besides their multiple debacles with their albums, the band also faced the problems of drug addiction. Their lead singer Anthony Kiedis was fully addicted to drugs but it was his addiction that led to the critically acclaimed song Under the Bridge. The band has won seven Grammy awards with over 60 million album sales around the globe.

Riff Richard is an IT person, a husband, a dad, a couch potato and a passionate guitar player

This ebook will teach you how to play easy songs on guitar. It contains the most well known guitar riffs. Best of all, it's free to download today! We will send you confirmation Link in Your Email Please check your email.

BUY ME A COFFEE!